Markets Cautious, But Is The Fed Set To Disappoint The Doves?

Today’s meeting of the Federal Open Market Committee (FOMC) could be a outlook defining moment. As economic indicators have slid in recent weeks, bond and interest rate futures markets have been pricing for the Fed to ditch its current tightening bias and move to cut rates. Although no rate cut is expected today, the market anticipates a pretty unambiguous point towards rates being cut in the coming months.

According to CME Group (NASDAQ:CME) FedWatch, Fed funds futures are pricing for an 86% probability of a rate cut in the July FOMC meeting and three cuts in the next 12 months. It is interesting to see that this has been slightly dragged back in the wake of Trump announcing about his meeting with President Xi of China). So how is the Fed going to set its stall out today.

There will certainly be an air of caution from the Fed, but not to the dovish extent that the market is anticipating. The Fed is in danger of making itself look fairly silly if there is a massive dovish about turn, only for President Trump to make an agreement with Xi over trade and suddenly all is right again for the economy. The Fed will potentially replace its line on patience with something akin to “ready to act”.

Our expectation is that the dots will point towards maybe a net of one cut in 2019 and perhaps one in 2020. Much beyond that is difficult to see, given the massive uncertainty over the trade dispute still.

The market’s inflation expectations have fallen sharply and there will be a nod to this in the projections, but with the Atlanta Fed’s GDPNow cast looking at +2.0% (annualised) GDP in Q2, the bottom has not fallen out quite yet on growth. We could be set up for a hawkish surprise. In this scenario, expect Treasury yields to bounce along with the dollar (pulling EUR/USD towards the recent $1.1110 lows). Gold would see a correction, whilst the breakout on equities could also be corrected.

Wall Street jumped sharply yesterday on Trump’s positive comments on the trade meeting with President Xi of China at the G20. The S&P 500 closed +1.0% higher at 2917 with US futures all but flat this morning. Asian markets have responded to the positive close on Wall Street, with the Nikkei +1.7% and Shanghai Composite+1.3%. European markets are set for a quiet open with FTSE Futures and DAX futures all but flat.

In forex, the theme of cautious consolidation continues, with all but no move across the forex majors, aside from a slight degree of JPY strength.

In commodities, a consolidation on gold and silver, however the rebound on oil (on the Trump/Xi meeting) is being sustained by a further +0.5% gain.

The EIA crude oil inventories have shown surprise builds in recent weeks but at 1530BST are expected to drawdown by -2.0m barrels this week (+2.2m barrels last week). However, the big focus for everyone is the FOMC monetary policy decision at 19:00 BST which is not expected to show any change to the Fed Funds range of 2.25%/2.50% (no change in May at 2.25%/2.50%). However, watch out for a dovish message to be projected through the FOMC statement, dot plots, and through the inflation and growth projections. The question is just of how much of a shift in expectation on a rate cutting cycle will the Fed signal?

A double whammy of positive news for Eurozone equities came to put rocket fuel into the boosters again for the CAC. A dovish Draghi and positive news on Trump/Xi meeting boosted the CAC 2% yesterday. Whilst the DAX has struggled on risk aversion, the technical outlook on the CAC has actually been well set up. The move formed a huge bull candle and burst through resistance in the band 5431/5450. This band has acted as a pivot for the past few months and the CAC is now open to a move towards the April high of 5601 again. Technically the outlook has been improving in recent weeks and 50 on the RSI has provided a floor for the market to boost higher. A decisive move into the 60s opens upside potential again. The pivot band now becomes a key gauge of support between 5431/5450 for the CAC for the reaction to the FOMC meeting today. A higher low at 5342 has been left and whilst the support of the pivot band is intact then corrections will be seen as a chance to buy for a retest of 5601. 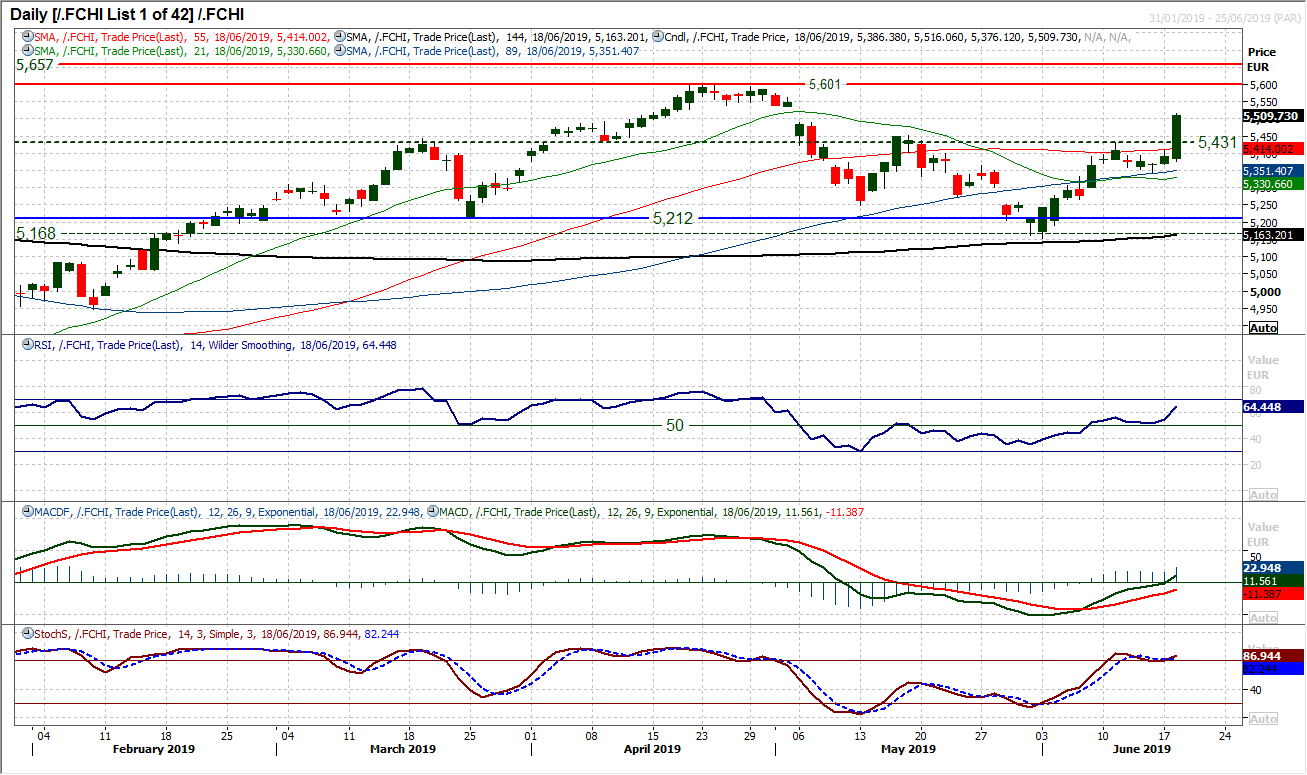 The euro looks increasingly on a corrective path. The past two sessions has seen attempted intraday rallies being sold into to form neutral to negative candlesticks and the market under pressure. The RSI has now fallen in the mid-40s, along with MACD and Stochastics tracking lower. Since the bearish engulfing candle at the top last week, the past four sessions have all had lower session highs as rallies are now sold into. The hourly chart shows $1.1245 as resistance above a growing pivot around $1.1200. Hourly momentum is negatively configured, with hourly RSI failing between 50/60 and MACD lines under neutral. Initial support at $1.1160 whilst a retest of the lows at $1.1110 is increasingly likely now. The main caveat is that the FOMC meeting tonight will be a key event for defining the near to medium term outlook and needs to be watched. 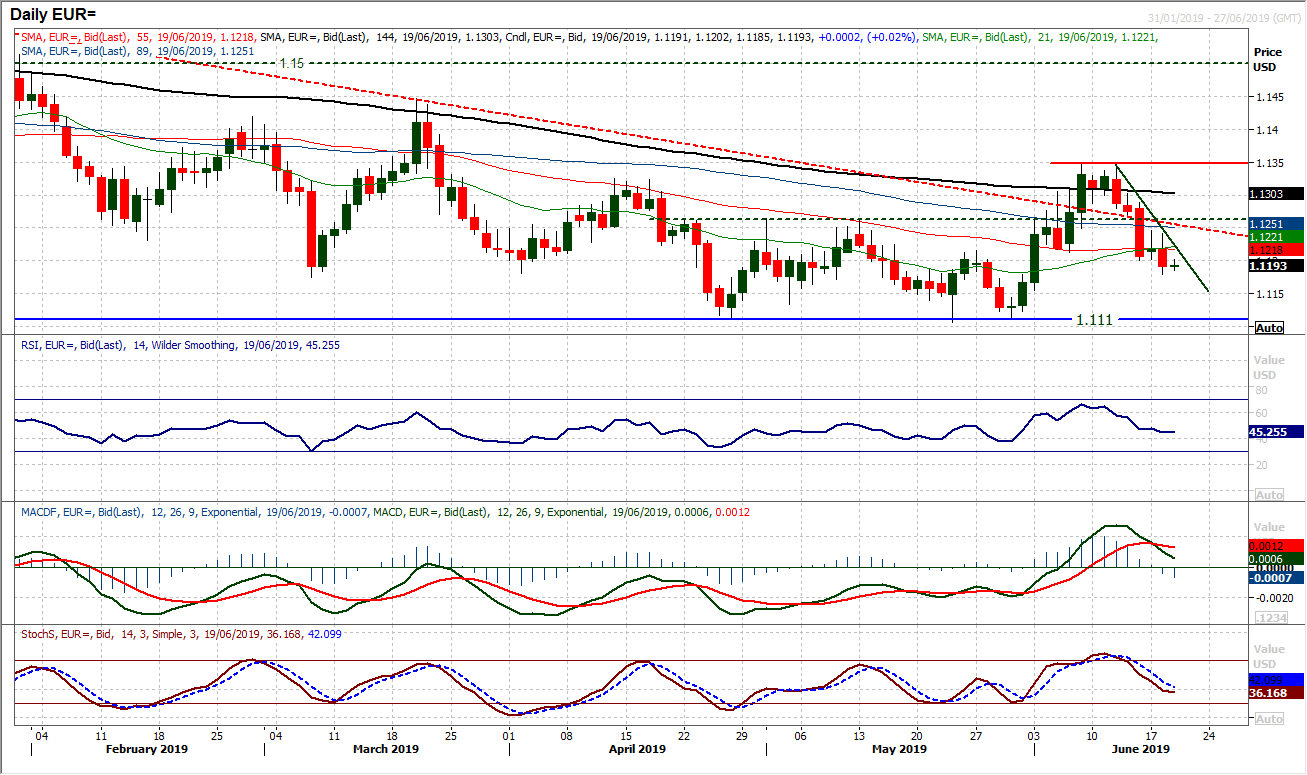 Sterling remains under pressure. Technically we see Cable having broken down to multi-month lows (below $1.2555) in a move that has re-opened the December/January lows at $1.2475/$1.2435. The configuration on momentum suggests that rallies are a chance to sell. Although the RSI has ticked higher with an early intraday rebound this morning, it remains negatively positioned in the low 30s. The MACD lines are crossing lower whilst the Stochastics have fallen to below 20. The hourly chart shows the market has bounced back into resistance around $1.2555 whilst hourly RSI and MACD lines are primed for renewal of selling pressure. There is further resistance around $1.2600 and $1.2650. With continued drag of UK politics, sterling rallies remain a chance to sell. The Fed tonight is a near term caveat. 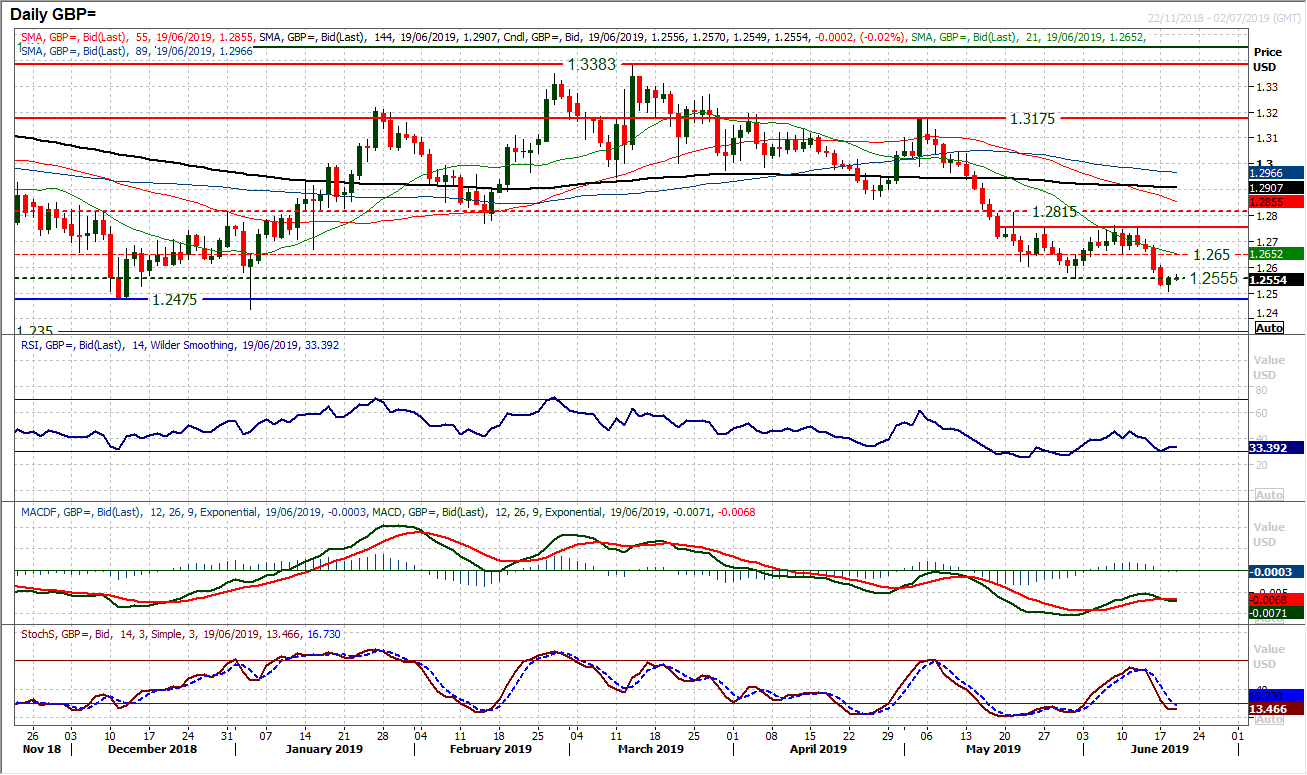 Even though the dollar is making ground across major pairs, it is a massive slog struggle against the yen. Once more Dollar/Yen has unwound back to resistance around the 108.50/108.80 area, where it is fading. Daily momentum signals are pushing for continued selling into strength, and with the looming resistance of the downtrend channel (today at 108.80) and 21 day moving average (today around 108.80) the bulls are under pressure. However, this could simply be a sideways market of the past couple of weeks, gearing up towards a reaction on the Fed. It would certainly seem that this is a market riddled with uncertainty, and the Fed could provide some extra clarity tonight. Any surprise would likely drive a sharp dollar move. So watch for a breakout above 108.80 (on any hawkish surprise), or below 108.00 (on a dovish Fed). A closing breach of either level would be outlook defining. 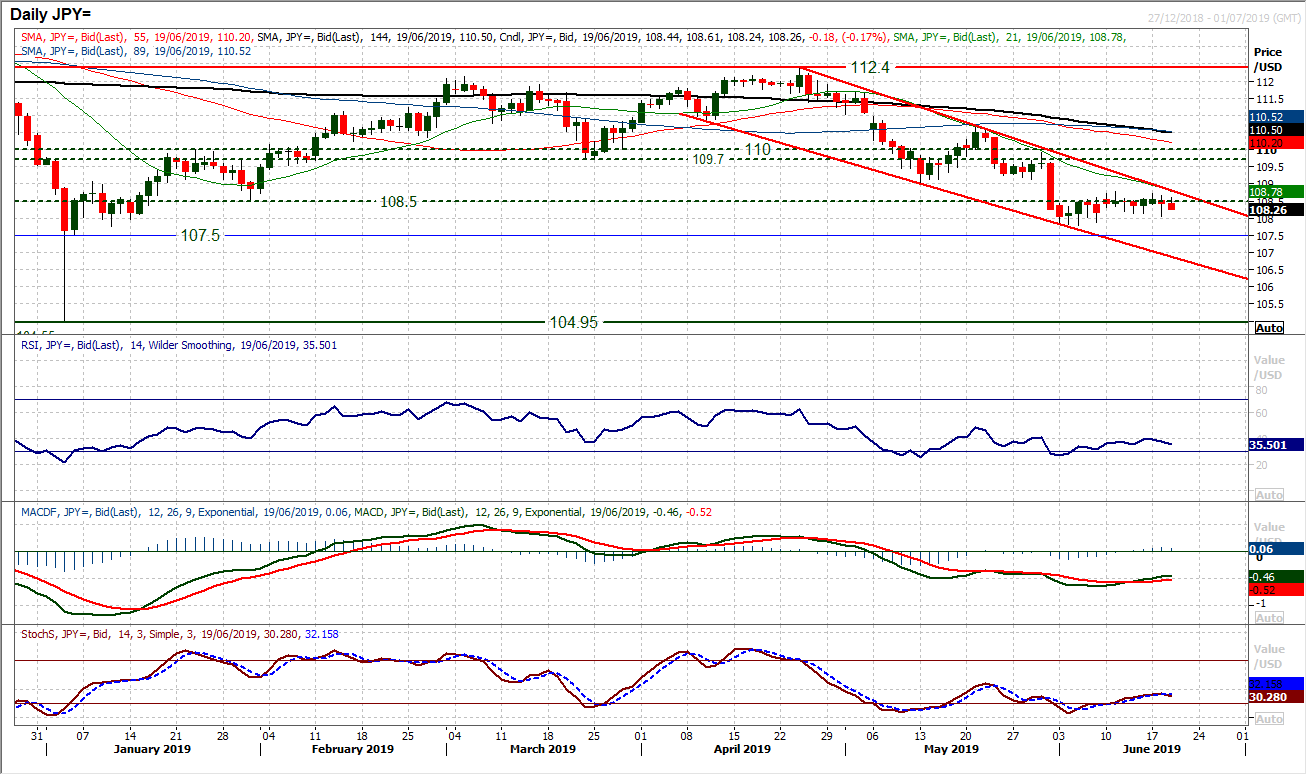 A huge turnaround on the positive news on the trade dispute has pulled gold back once more. It just shows how sensitive gold is to news flow now. A dovish Draghi (looser monetary policy should be gold supportive) had initially driven a breakout above $1348 again. However, this second attempt to breakout again was met with selling pressure (on elevated risk from news of the Trump/Xi meeting). Once more the formation of a failed breakout above $1348 has left a (mild) disappointing candle and the bulls unfulfilled. Closing at the session mid-point (marabuzu) leaves an air of uncertainty. It means that gold traders move into the crucial Fed meeting tonight with questions unanswered. Could there be another disappointment for the Fed doves that would drive a gold correction tonight? Technically the outlook remains positive, with another higher low in prospect at $1332 the bulls are still broadly in control. Momentum remains positively configured whilst RSI remains above 65 and Stochastics remain above 80. Reaction to the FOMC meeting could be crucial. The bulls are still looking for a close above $1348 to really suggest pressure building on the long term resistance band $1348/$1375. A close below $1332 (if the Fed fails to meet dovish expectations) then this could open a corrective move back towards $1324 and $1319. 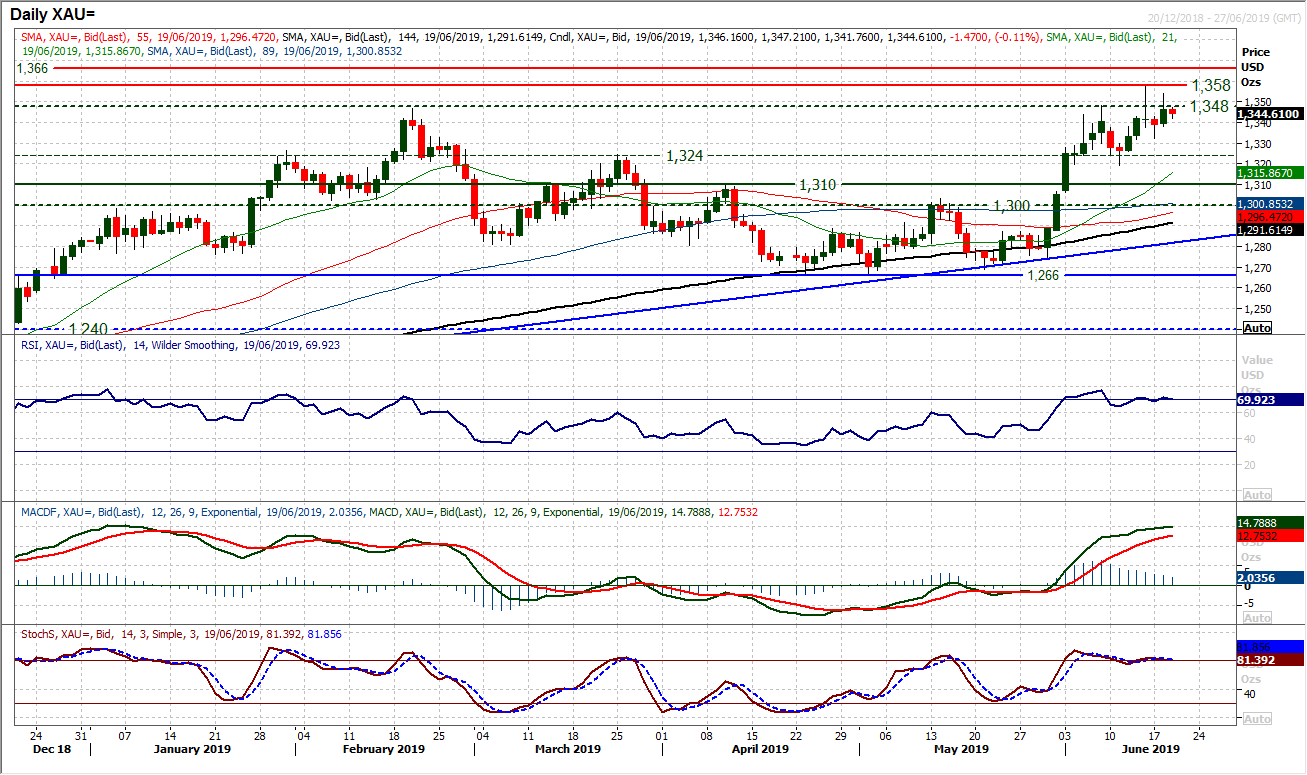 A sharp bullish candle has changed the outlook. Once more it is newsflow affecting the demand side of the oil equation that has made the move. Trump’s meeting with China’s Xi at the G20 opens the prospect of an end to the trade dispute and better global oil demand outlook. Technically, a bullish engulfing candle (bullish key one day reversal) has decisively encouraged the bulls. A close above $53.45 has put them firmly in the driving seat. The key breakout would be above $54.85 which is the June high and a level above which would complete a small base pattern. It would then imply a $4.25 upside target. The bullish engulfing is being confirmed by a bull cross on MACD lines and a buy signal on Stochastics. At least until the G20, the outlook seems to be aligned for recovery. Technically a breakout above $54.85 would be the trigger. The hourly chart shows initial support $53.00/$53.50. 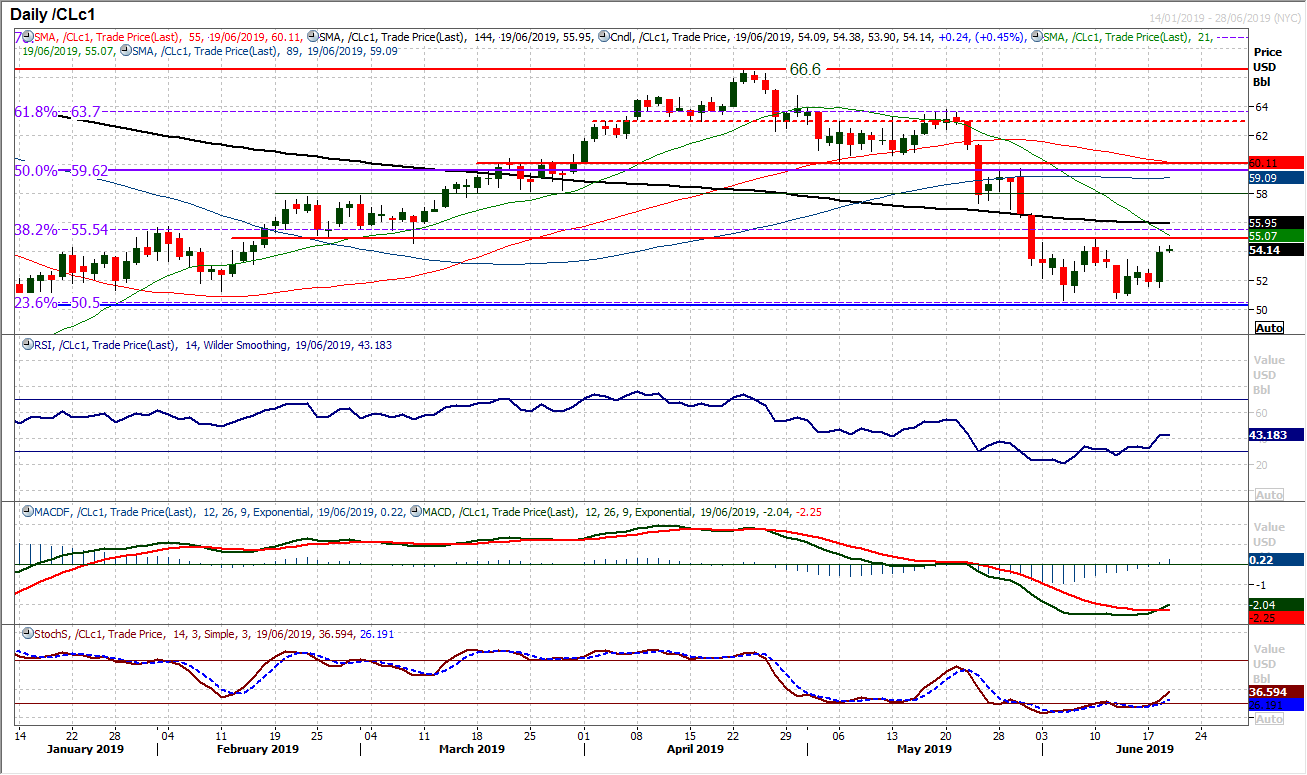 A huge upside break has come as the bulls have regained control. A period of consolidation above the breakout at 25,958 has gapped higher and formed a strong bullish candle. Is this a bull flag breakout? It certainly has all the hallmarks of one. A strong run higher for a week, followed by a week-long consolidation and subsequent upside break. The inference of the break suggests the high at 26,695 and all-time high at 26,951 will now be tested, whilst a potential move towards 27,500 is measured. The key though could be today’s FOMC meeting. The problem is that if the doves are disappointed, the move could be halted in its tracks. The breakout support at 26,249 is supportive, with the gap open at 26,165. Momentum is strong with upside potential on RSI and MACD lines. If the Fed is dovish tonight, the Dow could soar. 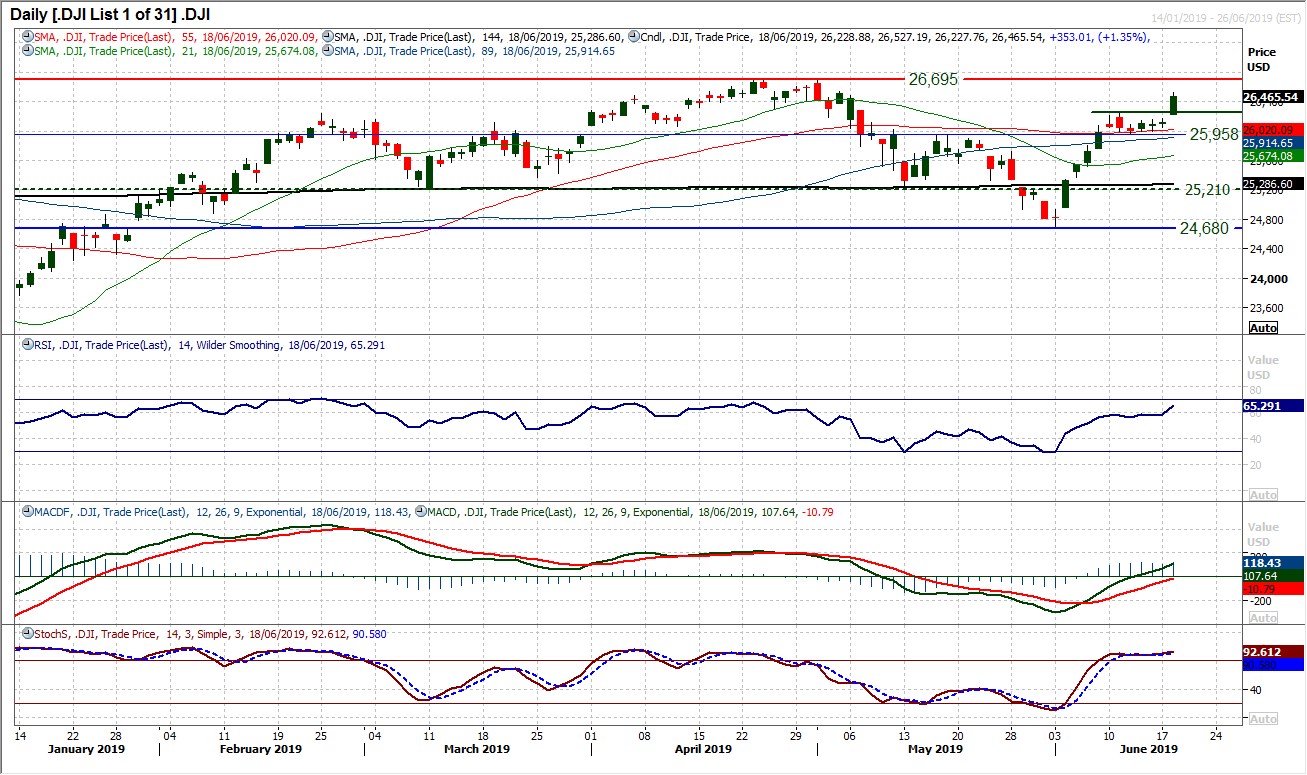